“The Many Hell Stories” by Ryunosuke Akutagawa

And check what percentage of this story you understand! 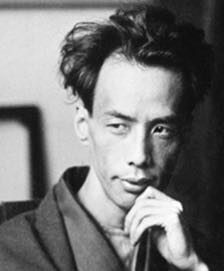 Ryunosuke Akutagawa was a Japanese writer and one of Soseki Natsume’s apprentices.
He was born in 1892.When he was seven months old, his mother developed mental issues, and he was taken in by his uncle.

Just like Soseki Natsume, his major in college was English literature. It’s said that this lends his writing-style a more British aspect.

When he was around 30 years old, he began to experience mental illness.Despite not being Osamu Dazai, he still tried to commit double-suicide with his secretary. Although neither of them perished in that attempt, Akutagawa would eventually die by his own hand after having overdosed on sleeping pills.

“The Spider’s Thread” and “Hell Screen” are just two examples of the many popular stories from amongst his writings that are frightening stories about hell.
Since my major was Japanese literature, I read many of these horror stories. It was rather frightening.

Today, I would like to talk about his story “Rashomon,” which was adapted into a film directed by Akira Kurosawa that went on to win an Academy Award in the USA in 1951.
“Rashomon” was written in 1915, and its theme is “the evil necessary in order to live.”

Kokoro, by Soseki Natsume, was written with the depressing them of “it’s frightening how easily good people can suddenly become evil when necessary.” Comparatively, the novel we’re about to discuss carries the theme of “evil is inevitable if we are to live”.

This story takes place during the Heian era (from 794 to 1185), during a period when a series of pandemics and natural disasters occurred causing mass foot shortages and allowing disease to spread.Therefore, many people began to carry a callous heart that could not allow for any trust in others.

The main character, who has lost his job and had no means to procure food to eat, attempts a robbery, although he finds he lacks to courage to go through with it. Feeling lost, he wanders around the Rashomon gate, where he discovers many dead bodies that have been discarded on the second floor of the structure.

There, he sees an old woman trying to make wigs by pulling out the hair from the dead bodies of young women. The man, enraged by what he saw, pulls out his sword. However, the old woman justifies her actions.

“I know there’s something wrong in making a wig using the hair pulled from a dead body. However, I have no other way to live. These dead people used to do similar things while they were still living.” “This dead woman used to sell what she claimed to be dried fish, but which was in fact dried snake. What she did was an evil act that simply couldn’t be avoided if she wanted to keep living.” “That’s why I believe she would forgive me for pulling out her hair.”

Hearing these words, our protagonist feels courage well up within his heart.He then pushes down the old woman and steals her clothing, leaving her with the words “and if I don’t do this, my body will waste away from starvation.”

What would you do yourself in such a situation?!Are you willing to die quietly, or would you debase yourself by become a thief?If you had children, it would be your duty to protect them! Either way, this all certainly leaves me feeling grateful that I have a place to live and food to eat in the Japan of today. 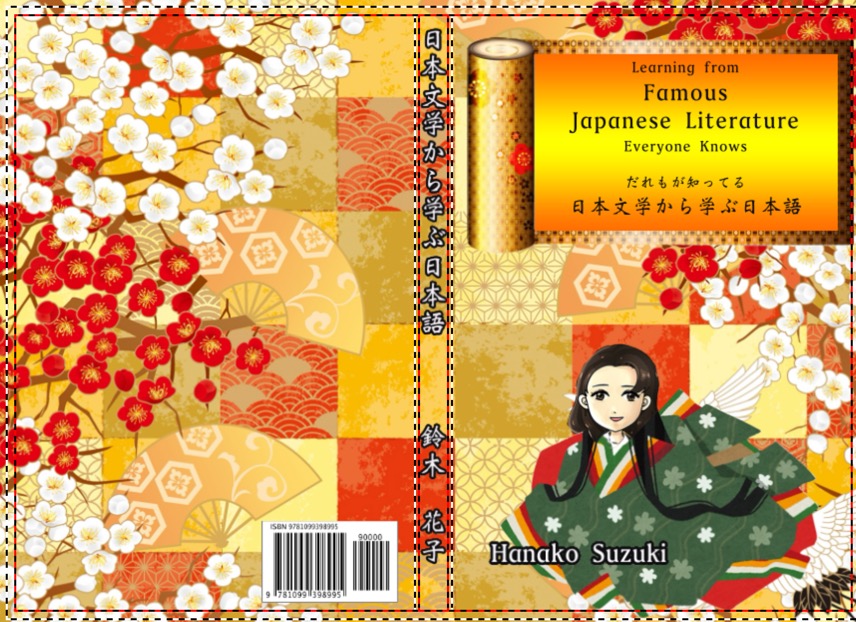 I was born and raised in Japan, and I majored in Japanese literature at a university in my home country.I realized that if Japanese language-learners learned about Japanese literature, they would in turn be able to learn about how Japanese culture and about how we think.If you bought this book to learn the Japanese language, I imagine you are probably an advanced Japanese learner. However, even if you are a newcomer to Japanese and read only the English sections, you will still come to understand something about how Japanese culture has been formed.Once I put furigana (spelling out the kanji in hiragana) on a certain kanji, I will not write furigana for that kanji again.So you will find many furigana in Chapter 1 but less furigana in Chapter 30. If you read through this book many times, you will eventually memorize kanji.Keep on going

Print it out from here! 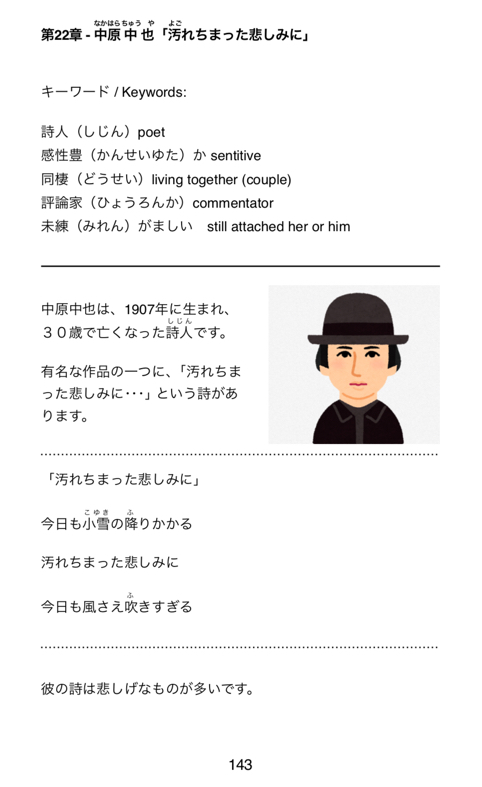 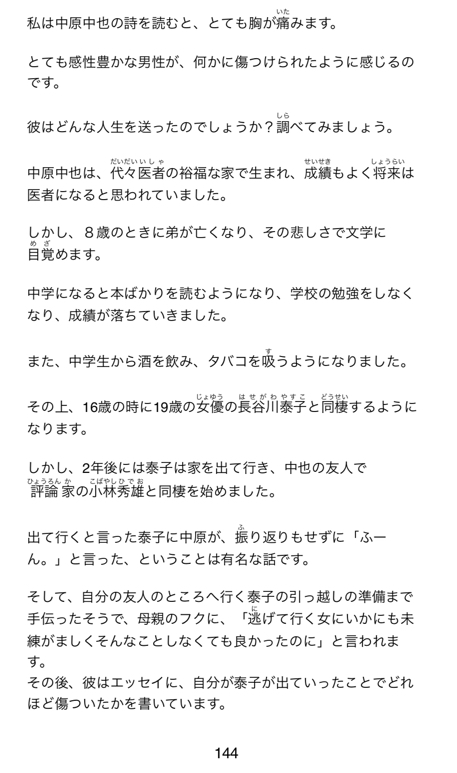 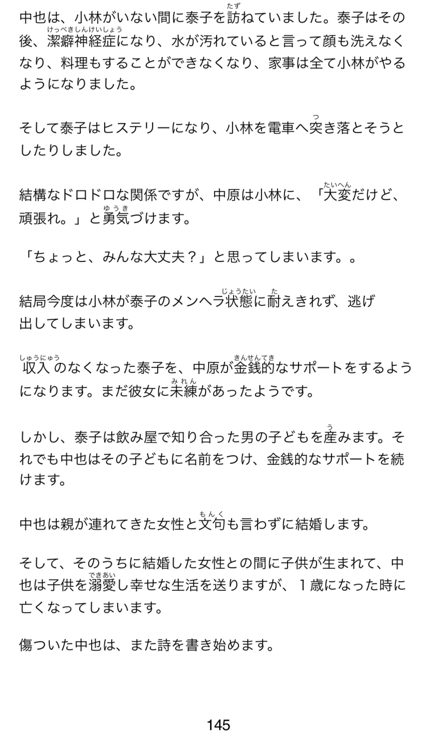 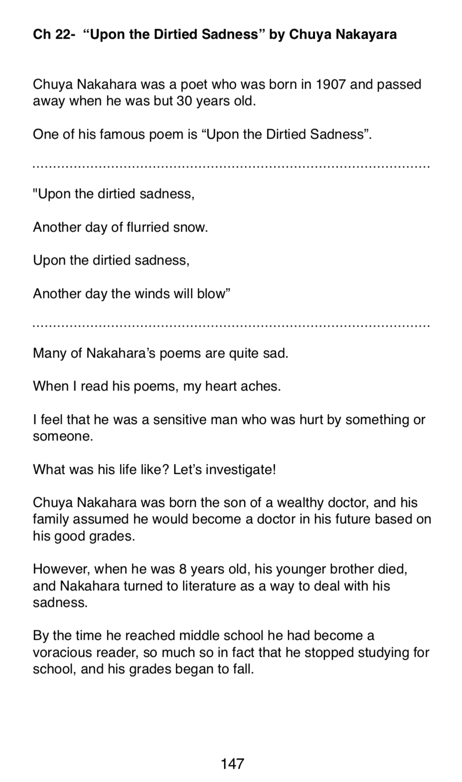 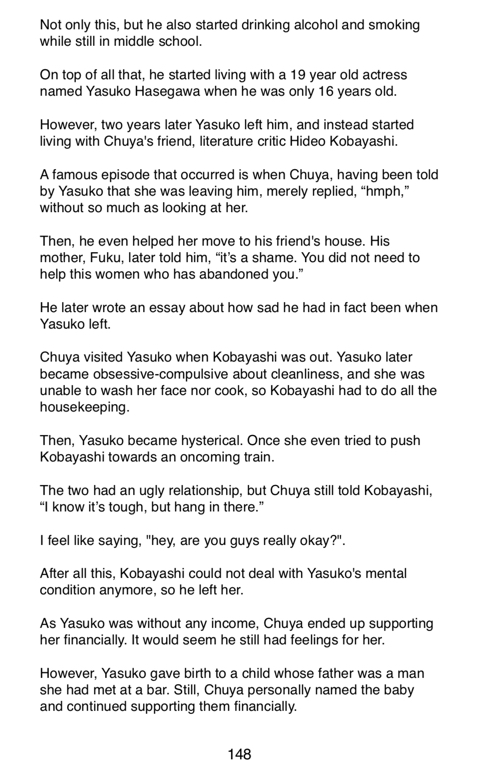 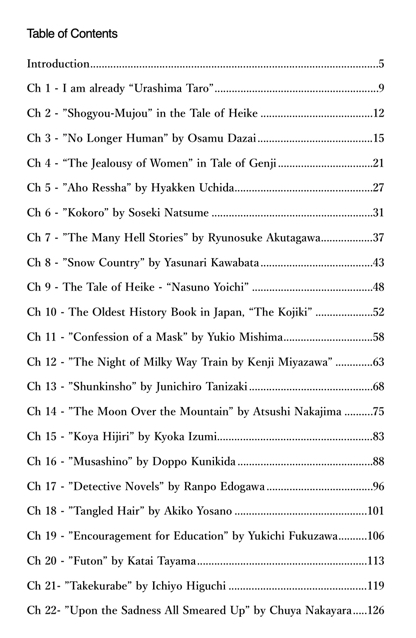 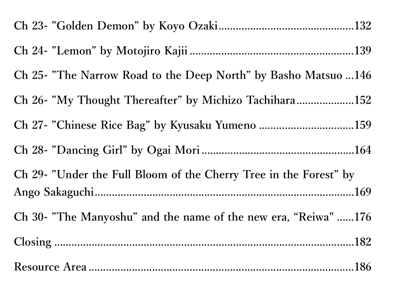 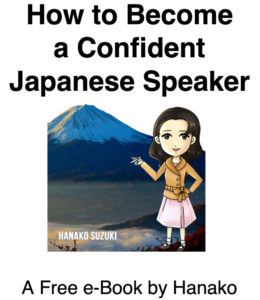 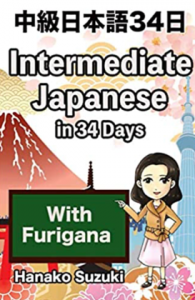 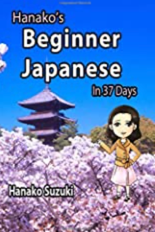 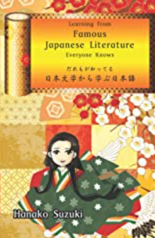